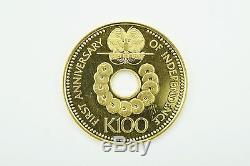 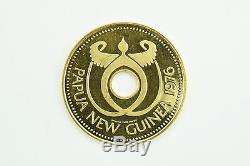 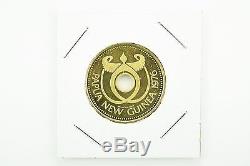 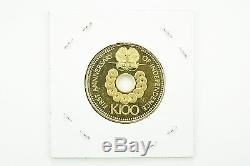 The 1976 One Hundred Kina Gold Coin of Papau New Guinea is the first modern gold coin with a center hole. It commemorates the nation's first anniversary of independence. As an official monetary coin, it can be spent at face value in Papua New Guinea.

It contains 9.57 grams of 900/1000 fine gold and was minted with a full Proof finish. The obverse design includes both the Bird of Paradise national symbol and --around the center hole--a design of that traditional string of coins.

The legend reads: First Anniversary of Independence. The reverse carries the official crest of the Bank of Papua New Guinea, the nation's monetary authority.

Located north of Australia on the second largest island in the world, Papua New Guinea attained its independence on September 16, 1975. The nation encompasses some 600 islands of the Eastern Archipelago. Proofs of this coin were minted in strictly limited edition by the Franklin Mint. No other Proofs of this coin will ever be minted again. Fineness : 0.900 Actual Metal Weight : 0.2769 ozt Weight : 9.57 grams Obverse Designer : Richard Renninger Reverse Designer : Daniel Stapleford. On the other hand, we will not cancel your order once it is locked in and paid for. Return : We want our customers to be 100% satisfied. If we agree to do so, you must return the item following the instructions given by our sales representative. We ask that you work with our representative to come to amiable terms for all parties.