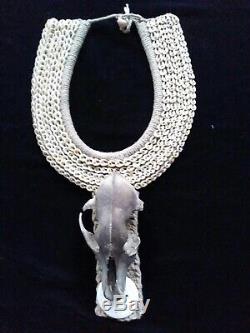 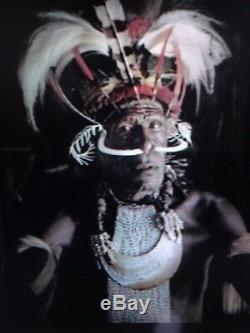 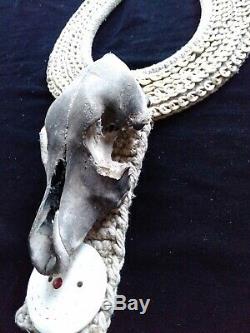 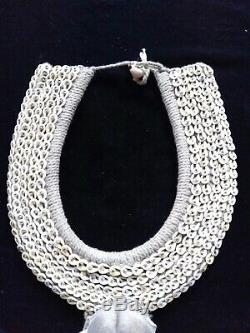 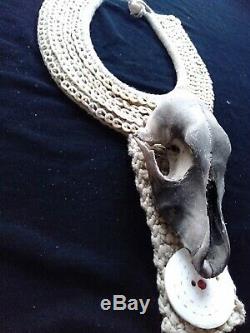 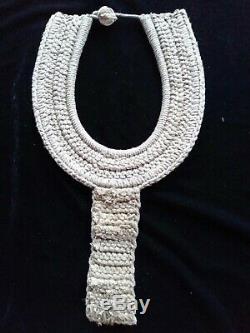 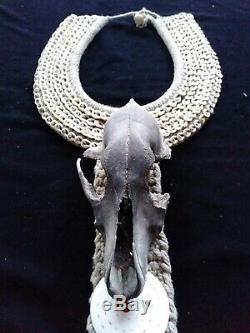 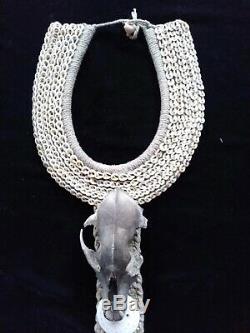 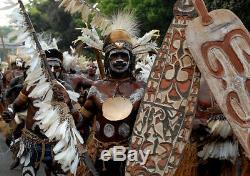 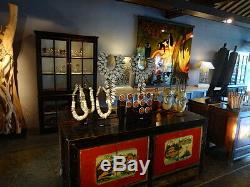 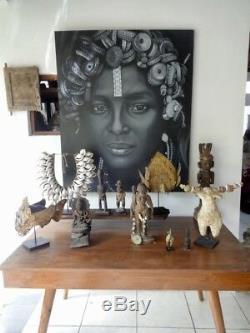 Check out my other items. Asmat shell Skull necklace adornment.

Tribal Papua New Guinea Home. Measures : 40 cm x 23 cm = 16" x 9" inches. A wearable work of art that is also suitable for display in your home as a great conversation piece.

Your friends will be amazed. The Perfect gift for any occasion. For The Collector and art lover Who Has Everything. However if you see something that you like, you can ask me if it is still available.

Asmat is the most famous cannibalistic tribe on Papua. They would put human skulls under their heads instead of a pillow. They would eat brains of their animals mixed with sago worms straight from their halved skulls. They live on small islands in mangrove vegetation nearby the sea, on the south side of the western part of the New Guinea Island. The Asmat build long houses, where they live together.

Every family has its own reserved fireplace. In the long house about six or even ten of the group members live. Besides the fact that the Asmat were head-hunters, they also hunted for names. Every person was named after someone deceased, or after a killed enemy. A child was sometimes given a name only ten years after it was born, and after its village set out to kill a man from an enemy village nearby.

They had to learn the name of the man they killed, and then bring his skull to their village. Only in this way could a person get a name.

Asmat did not only hunt for skulls, they also worshipped them. The skulls of the deceased were stripped of the brain and the eyes and nasal parts were closed up in order to prevent evil spirits to enter or exit the body.

Skulls that were modified and decorated in this way, were displayed by the Asmat in a honorable place in their long homes. Fortunately, the evil reputation of Asmat has become history. Catholic and muslim missionaries have made been converting tribal people for centuries. We will reply within 6 hours. We wish you a long life abundant of health wealth and wisdom. Mist tribal peoples of Africa Asia and south East Asia. Collecting tribal art is my passion, I have been collecting tribal art and antiques for well over 25 years, my collecting trips have taken me to many distant countries, the artifacts of interest are authentic tribal and ethnographic implements used in divination and healing. My travels have taken me to out of way places where there are no cars or hotels, some of the remote places are only reachable by foot , so I often take long treks into the bush to find some of these rare pieces , but mostly its a question of being in the right place at the right time , my collection consists of ethnographic material from animist tribal peoples of Africa Asia and south East Asia.

PLEASE BE SURE TO TAKE A LOOK AT OUR OTHER FINE AUCTIONS. The item "Asmat Tribal Shell Skull Necklace Papua New Guinea Art Hand Made" is in sale since Wednesday, August 21, 2019. This item is in the category "Antiques\Ethnographic\Pacific Islands & Oceania". The seller is "nouvelesprit" and is located in Bali-UBUD EAT PRAY LOVE.