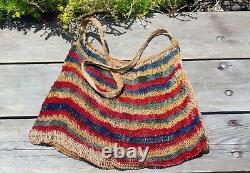 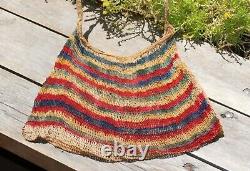 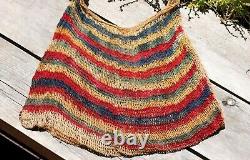 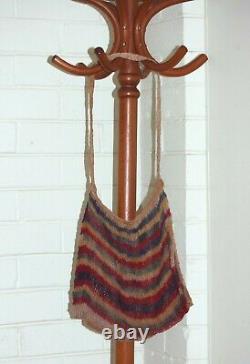 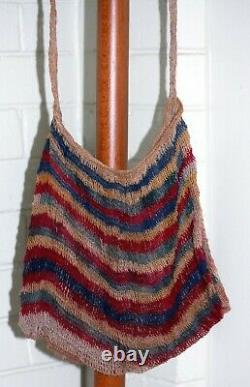 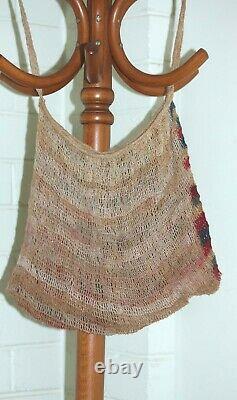 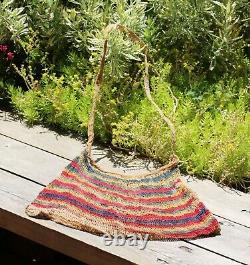 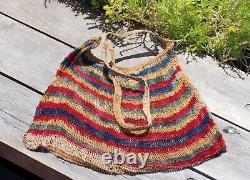 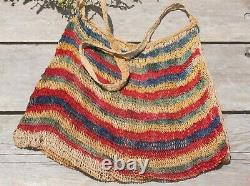 MID 20TH C FINELY WOVEN. This excellent example of a PNG woven. Carrying bag has just turned up out. It was put in the can't deal with it now'. Box when we owned and ran.

And we have only just found it again. It is relatively tightly woven for one of these.

Bilum bags and the weave has lost virtually. None of its stretchiness over the years nor. Have the colours faded either.

It's a very good example of a vintage. Papua New Guinea Bilum bag. Now for the NASA connection.

This is a fascinating story in itself. We are 98% sure it was part of a. Small but very interesting Aboriginal and.

Pacific Islands collection we acquired a few. Years ago from the estate of an American. Working in Australia in the 1960s. We did get another collection of Pacific.

Region items around the same time but. Those items were from the 19th century which.

This little bag is not. The collectors name was Walt Larkin. Walter Larkin was born an only child in San Francisco. During the Great Depression his parents.

Sent him to live with his grandparents and later to. Live in boarding houses while he worked at nights. And weekends to finish school. He enlisted in the navy just after the Pearl Harbour. Attack in 1941 and spent the war in the Pacific. Which presumably is when his passion for native. Pacific Island items first began. He married his high school sweetheart Patricia Waldron.

(who was also an only child) in 1951and they had. Six children who they took travelling with them.

As much as possible over the years to keep. The family together - a conscious decision from. Both of them as a direct result of their own. Although Larkin was self-taught and had no formal. Qualification, in 1956 he joined the Jet Propulsion Laboratory.

Set up by the California Institute of Technology to build. Rocket engines (as one does). In January 1958 he was part of the team that launched.

Larkin became director in 1959 of the Deep Space Network. To be based at Goldstone but first he had to build the complex. The complex could be any size or shape, as long. In 1961 President Kennedy announced America's intention.

To put men on the moon. After Goldstone was up and running. Larkin and his team helped set up similar stations in. South Africa and in Woomera, Central Australia where he was. By the Australian Defence Department.

To Australia, representing the Jet Propulsion Laboratory. And the Deep Space Network.

Soon after, it was decided that. Australia's part in the space race should not be on. Military land at Woomera and that it would be moved to.

Not only was the move. A good idea politically but it was easier to transport.

Machinery and equipment from the US. Walt Larkin helped to build the three main tracking stations. That picked up the first moon landing signals in 1969.

Goldstone in the Mojave Desert in southern California. And the Parkes radio telescope. Walt was actually at Honeysuckle Creek when it helped to.

Relay the signals of the moon landing to the world. He was also commonly held to have been the model. For the NASA representative Al Burnett in the 2000. Australian film The Dish, about the Parkes telescope. And the moon landing, although there were several. NASA men working in Australia at the time. When Apollo 11 landed, its signals were sent to.'his three stations, then the Australians sent their. Signals on to Sydney and Houston. NASA first switched between the signals from. Goldstone and Honeysuckle Creek then found that. The Parkes pictures were so good that it stayed.

It was anticipated that the Australian. Stations were going to be the most useful in this. Event as they would be in the correct position facing. The moon when the astronauts left the landing module.

Everything went smoothly except for the weather. Strong winds hit the Parkes telescope just as it was. Coming on-line but the staff kept on working, risking. Injury to themselves and damage to the equipment to. Get the broadcast to the world.

As a result of the time-lag for the signals reaching. The United States and a six-second delay NASA. Added in case of "astronaut mishap", Australia. Saw the landing on TV just a little before America.

After the landing, Larkin continued working in Australia. South Africa and the US, co-ordinating directors of the.

Various stations in support of NASA unmanned missions. To other planets, as well as the rest of the. Every year to visit family members. Walt Larking was survived by his children. Maureen, Kathleen, Craig, Blake, Brian and Barbara, and their families. His wife Pat pre-deceased him in 2005. At their request, their ashes have been sprinkled on Sydney Harbour. Now doesn't that make this one very special little bag! Still has a lot of'give' in the weave. One small hole on the front left bottom. Measures approx 36cm (14) across the base. Of the bag itself and approx. From top to the handle to the bottom of the bag. The strap is 1.5cm wide. We guarantee our descriptions are accurate. Please bear in mind that all our items are antique or. Vintage and may have some age related issues. If you like your item please leave us feedback.

And we will respond immediately. If, for any reason, you are unhappy. Come back to us so we can try and. Resolve any issue you might have. If you are undercharged we don't ask for more.

Any questions or query's please contact so we can look into it. BUT IF THE ITEM IS VALUED AT. IT HAS TO BE INSURED. These charges are the buyers responsibility. Determine what these additional costs will be prior.

The item "MID 20TH C FINELY WOVEN BILUM BAG WITH CONNECTIONS to NASA & the Moon Walk" is in sale since Sunday, December 6, 2020. This item is in the category "Collectables\Cultural, Religious\Pacific". The seller is "kollectik1" and is located in Central Coast, NSW . This item can be shipped worldwide.