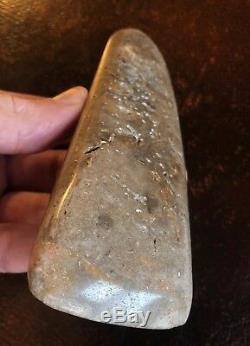 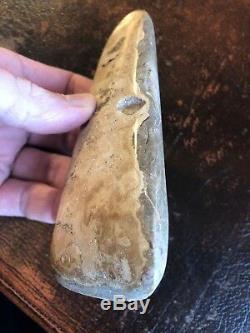 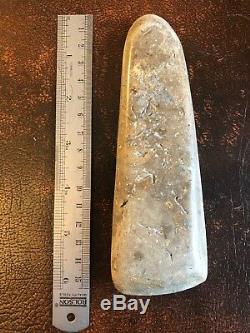 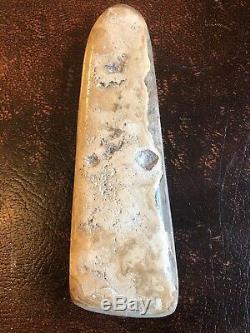 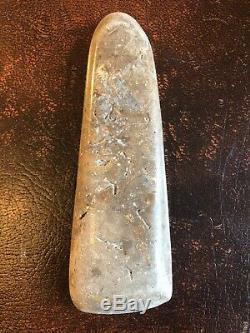 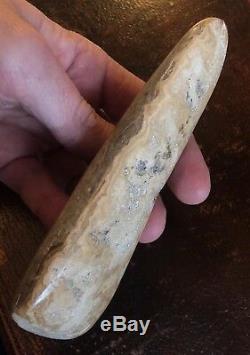 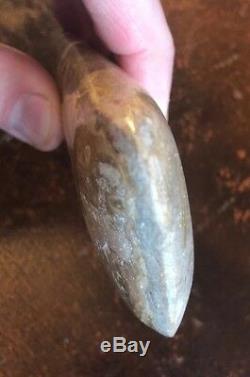 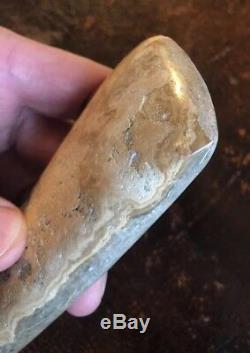 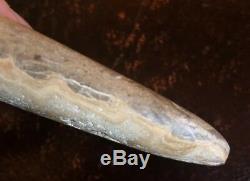 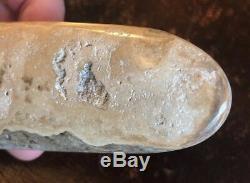 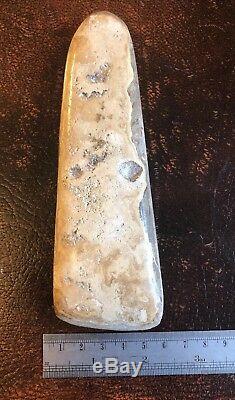 This fine example measures approximately 15cm long by 5cm at it widest and 2.4cm at it thickest. It has an unusual grey colour with a band of lighter stone on one side. Grinding is meticulously carried out and gleaming polished varieties of stone with coloured bands are often seen. The hafting is distinctive and decorated. Most famous of those axes is the Mount Hagen axe.

Most of these axes are made in the villages in the Jimi Valley, north east of Mount Hagen where the stone is quarried. A prestige item, they were carried or worn in the belt for adornment on special occasions such as sing-sing and moka exchanges.

Because of the risk of breaking the thin blade they were only used for cutting off fingers as a sign of grief and sometimes in close combat. The axes produced today are identical to those made in the past, except that most of the stone used now is softer and more fragile as it is easier and quicker to work.

Axe blades were worked at a special grinding place which had a constant water supply, sandstone blocks and a shady place to sit. In the 1960s, a few old men still had considerable knowledge of the different kinds of stone. One man was capable of identifying rock fragments representing each of the eleven named sub-categories of the three main rock types at his site. Bridal axes are characterized by their uncommon size.

The blade can be 45 cm long and 15 cm broad. Although highly polished and sharpened it is not done with the same care given to a ceremonial blade. The blade is mounted on an enormous, rough wooden haft, which is usually black and shiny from years of storage in the rafters of the smoke filled houses.

Work axes are distinguished by a thick and powerful blade with a coarser simpler, plainly woven haft. The work adze has a smaller, and usually badly worked blade set in the same type of hafting. Examples of How Stone was Quarried At Dom in 1939 a large conical excavation was recorded by a Patrol Officer. The excavation was made in the side of a small hill with woven matting laid down to prevent loose earth from running in. In the centre of the cave was a 2m x m6 rectangular opening to a 10 metre deep shaft, solidly propped up with timber (the remains of 20 or more filled in and overgrown shafts lay nearby).

Cracks were produced in the solid rock partly by hammering it with wooden billet and partly by alternately heating it with fire and then pouring cold water on it. Wedges were next forced into the cracks and blocks broken free. With the help of vines these blocks were raised to the surface.

Another type of quarry at Ganz River was situated on a hillside with a water race leading to the top of it to wash ground away and expose and loosen the rock. At Mbukl an outcrop of good quality stone was exposed on the steep side of a stream-head gully. The above three quarries and about ten others, in more remote areas, supplied most of the Highlands areas together with adjoining lowland areas from the Gulf of Papua to the foothills south of the Sepik River and to Mt. Michael in the east - an immense area. The item "Old Antique Papua New Guinea Hard Stone Ceremonial Currency Axe Coin Art Club" is in sale since Tuesday, November 6, 2018.