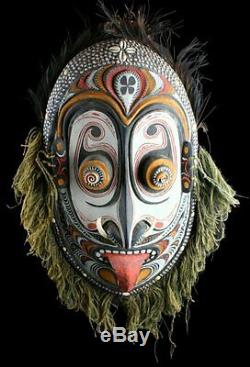 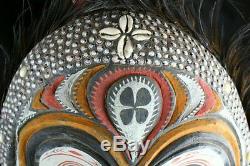 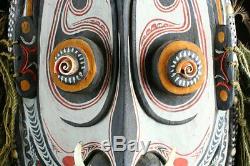 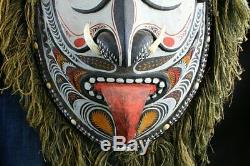 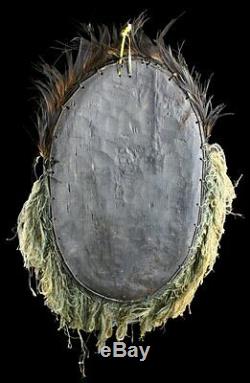 Ceremonial Mask of carved wood with polychrome paint decoration, boar's teeth, cowrie shells in two rows and psychedelic looking eyes made from volute shells cut in half. 28 x 18 x 5. New Guinea, the second largest island on earth, is perhaps best described as a world of its own. This remote area to the north of Australia has remained largely isolated from outside influences both ecologically and culturally.

Occupying the western half of this huge landmass is the remote Indonesian province of Papua (formerly known as Irian Jaya); the eastern half composes the mainland of the independent nation of Papua New Guinea. Geographically New Guinea is a land of contrasts.

Lying just south of the equator and wholly within the tropics, its coastal regions are steamy mangrove swamps that merge into dense inland jungles. The rugged interior rises thousands of meters to snow-capped mountains and insular valleys. An incredible variety of cultures have arisen in these isolated valleys. The diversity of the people of New Guinea is illustrated by the fact that over nine hundred tribal languages are spoken on the island.

Along with its own language, each tribe has unique artistic expressions connected with its spiritual beliefs. Wildlife is abundant and diverse on the island and figures prominently in the daily lives of the people. Many types of plants and animals are recognized by the people in their religious beliefs and represented in their art forms. Cassowaries, crocodiles and pigs are the largest animals and are of great importance in the spiritual lives of the indigenous people. For example, the Iatmul tribe of the Middle Sepik Region attributes creation to a mythical giant crocodile.

Within the realm of primitive art, Papua New Guinea is unparalleled. Perhaps the most vibrant examples of this are the carvings produced in the Sepik River Basin. The Sepik River flows 1,200 km from the central spine of New Guinea to the Bismarck sea, one of the world's largest rivers in terms of annual flow. Unrestrained by dams or man made controls and having experienced very little exploitation of natural resources, the Sepik and its people remain windows into the past.