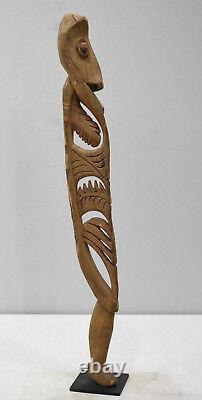 This an old Carved Wood "Kamangabbi" One Leg distinctive Hook Figures (Yipwon) from the Black Lakes Region, Sepik River, Papua New Guinea. These figures were kept in the men's ceremonial houses. The figures play a central role in hunting and fishing. Depicting powerful spirits, the images served as vessels into which the spirits were called before a hunt or raid and presented with offerings. The Myth goes, during the primordial creation period, the sun, who formerly lived on earth, first carved a slit gong (a large musical instrument).

As he did so, the chips of wood from the slit gong came to life as Yipwon spirits, who lived with him in the men's ceremonial house. One day, when the sun was away, the spirits killed one of his male relatives and danced around his body. Hearing the noise, the sun's mother, the moon, turned around and saw what the Yipwon had done. Terrified at being caught, the Yipwon fled into the ceremonial house, where they stretched themselves out against the back wall, turning into wood images. Enraged by their act, the sun ascended into the sky, leaving the Yipwon on earth to serve as patron spirits of hunting and warfare.

Yipwon images portray both external and internal features of the spirits. Although highly stylized, the head and single leg appear relatively naturalistic in comparison with the central section of the body, which consists of a series of opposed, concentric hooks depicting the ribs, surrounding a central element representing the heart. This would be a wonderful addition to your home or collection. Late 20th-Century COMES ON STAND Shows age, but overall in condition.

29 Inches Tall 2 3/4 Face Wide 1 Inch Wide Torso 1 Inch Wide Leg 3 Inches Deep AT BACARA WE STAND BEHIND ALL OF OUR MERCHANDISE. YOUR SATISFACTION IS OUR MAIN GOAL, AND WE THANK YOU FOR SHOPPING AT BACARA.

The item "Statue Papua New Guinea One Leg Yipwon Statue" is in sale since Monday, November 4, 2019. This item is in the category "Antiques\Ethnographic\Pacific Islands & Oceania". The seller is "bacara-online" and is located in Overland Park, Kansas.