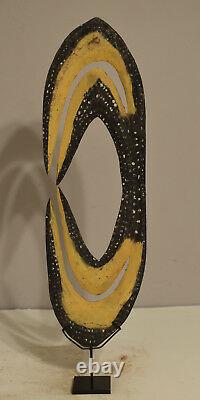 This is an Old Bahinemo Garra Cult Hook Figure from the people of the Hunstein Mountains, Middle Sepik, Papua New Guinea. These beautifully abstract painted one of a kind slender profile image is connected with water spirits, their curving hooks sometimes identified as catfish whiskers. The mens ceremonial house, in which initiation and other rites took place, these sacred objects, collectively called gra or garra, were kept. The Bahinemo hook images served as hunting helpers, with their supernatural powers assisting in the capture of game. They also played a role in male initiation ceremonies, in which they were carried by initiated men during dances. During these initiation ceremonies, the initiates held these figures between their legs and danced as a manifestation of a water spirit by keeping it immersed in swamps or other watery places. These spirits and what they represent were very important in their hunting and became necessary helpers.

They are part of the Sepik hook-shaped figure tradition that exists along the different regions of the Sepik River. They are rare and elegant and would be marvelous addition to your home or collection. LATE 20TH CENTURY COMES ON STAND Shows age, paint discoloration, but is in good condition. Rare and hard to find. 25" long 8" wide 1 1/2 deep AT BACARA WE STAND BEHIND ALL OF OUR MERCHANDISE.

YOUR SATISFACTION IS OUR MAIN GOAL, AND WE THANK YOU FOR SHOPPING AT THE WORLD OF BACARA. The item "Statue Papua New Guinea Water Spirit Cult Hook" is in sale since Thursday, April 2, 2020. This item is in the category "Antiques\Ethnographic\Pacific Islands & Oceania". The seller is "bacara-online" and is located in Overland Park, Kansas. This item can be shipped worldwide.